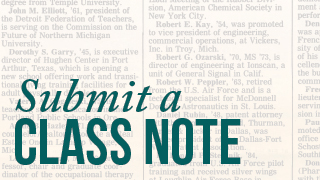 The Mannik & Smith Group, Inc. (MSG) has named John M. Havrilla, M.S. ’98, CHMM, as an Associate in the firm. Havrilla serves as Director of Compliance Management Services at MSG and has 30 years of experience including three years with MSG. Havrilla provides guidance on certifications and registrations, including International Organization for Standardization (ISO) audits. He also supports industrial clientele with regulatory compliance obligation management as well as completing environmental, health and safety compliance audits. Havrilla holds a master’s degree in Hazardous Materials Management from Wayne State University (1998) and is a Certified Hazardous Materials Manager (CHMM).

The Novi Oaks chapter of the American Business Women's Association recently recognized Holly Hengstebeck as the chapter's Woman of the Decade, in recognition of her contributions to ABWA. Holly has been a member of ABWA since 2008, and has held many positions on the Executive Board, and has also served as chairperson on multiple committees. She has been recognized as the chapter’s Woman of the Year twice, and has earned various APEX certificates from ABWA. Ms. Hengstebeck works as the Senior Financial Manager at Detroit Thermal, LLC., and holds a BS in Finance and an MBA from Wayne State University.

Paul D. Delacourt has served as the Assistant Director in Charge of the FBI’s Los Angeles field office since December 2017, leading an executive team with oversight of criminal, counter-terrorism, counter-intelligence and cyber operational divisions, intelligence, and mission services, and including nearly 1500 employees across the seven counties of the Central District of California. Paul was recently elected to the Pacific Council on International Affairs, and served as an Advisor to the University of Chicago, Masters program in Threat and Response Management/National Security. He previously served as the Special Agent in Charge of the FBI Honolulu field office.

Gary Garrett passed away in his home on August 26, 2019, following heart trouble. He was a professor of communications, public relations and English literature at many local colleges and universities. He also worked with the Red Cross and other nonprofits. Garrett was an active member of his Detroit community where he live for more than 50 years. In addition to teaching, Garrett had a passion for Shakespeare, jazz and his pet dachshunds. After retirement, he became the primary caregiver for a lifelong friend. He is survived by his sister and three generations of nieces and nephews.

Ruby I. Thompson Zuelzer died August 3, 2019. She was a pioneer of women’s rights as a standing member of the Professional and Business Women’s Foundation. Zuelzer supported her family while putting herself through college and then worked for many years at Children’s Hospital of Michigan. She also worked in the laboratory as a cytogeneticist and immunohematologist at the VA Medical Center in Bethesda, Maryland, and ultimately retired as the director of blood bank services under the Department of Pathology at Grenada Lake Medical Center in Mississippi. She was preceded in death by her husband, fellow Wayne State alumnus Dr. Wolf Zuelzer. He was a renowned pediatric pathologist, professor of pediatric research at WSU and director of the laboratories at Children’s Hospital of Michigan.