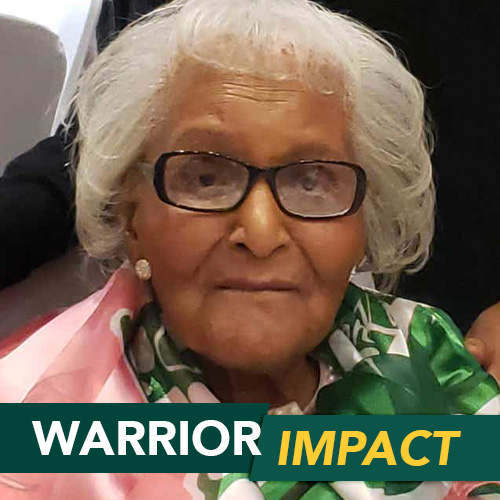 Today, we remember a very special member of our WSU alumni family, Ola Mae Spinks, who died on June 16 at the age of 106.

Born in Louisiana and raised in Oklahoma, Ola Mae moved to Detroit with her two sons in 1954, where they settled in Boston Edison. After a successful career as an elementary school teacher, Ola Mae received her Master’s degree from the Wayne State School of Information Sciences in 1961 and became a school librarian in the Pontiac schools until she retired in 1976.

In 1972, Ola Mae and her friend and fellow librarian, Phyllis Williams, spent their summer in Washington, D.C. as volunteers at the Library of Congress. While there, they organized and archived newspaper articles, photographs, and typewritten transcripts of interviews with more than 2,300 formerly enslaved people. These transcribed interviews, conducted by the Federal Writers’ Project between 1936 and 1938, became known as the Slave Narratives and offered raw, painful-to-read accounts of life as an enslaved person.

Unable to complete the archival in its entirety during their limited time that summer, the two librarians contacted the Federal City College and persuaded their History Department to continue the ambitious project to its completion. Ola Mae later received a letter of commendation from the Library of Congress for her work on the Slave Narratives, which her family has cherished to this day.

Thank you for your tireless efforts in preserving these truthful and often ignored accounts of American History. We will always remember you as #WarriorStrong! To learn more about Ola Mae Spinks, read her full obituary at: http://ow.ly/ELMk50Avoum.

Warrior Impact highlights the compassion, hard work and unwavering determination of WSU alumni during the COVID-19 pandemic and the efforts of those who are taking a stand to end systemic racism and positively impact the continued fight for racial equality and justice. If you have a story you’d like to share about you or a fellow alum, submit your story here.