“George Floyd mattered. He was loved. His family was important. His life had value. We will seek justice for him and for you, and we will find it.” 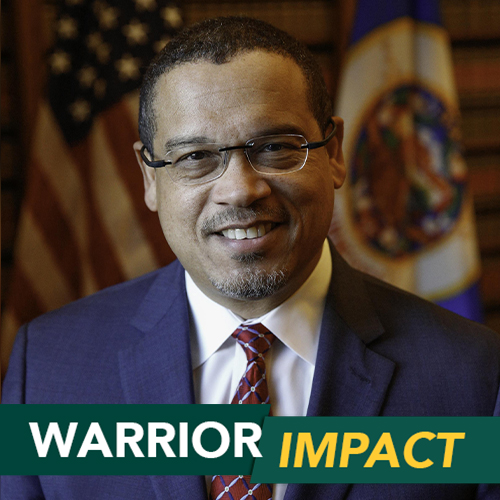 Meet Keith Ellison, a 1986 College of Liberal Arts and Sciences alumnus. You may recognize him as the Minnesota Attorney General and the man in charge of prosecuting the former Minneapolis Police officers, who made headlines and reignited racial justice movements across the world, after killing George Floyd in May of this year.

Over the years, Keith has made activism his full-time profession, first as an organizer and defense attorney, next as the first Black, Muslim politician elected to Minnesota’s state government, then as the first Muslim member of United States Congress and most recently as the first Black Attorney General elected in the state of Minnesota.

The grandson of a voting rights activist and NAACP member and the son of civil rights activists and WSU alumni, Keith was born and raised in Detroit along with his four brothers, three of whom also became lawyers and one, a doctor (and WSU School of Medicine alum!). During his time at Wayne State, Keith petitioned for divestment from the Apartheid South African government, found his voice as a columnist for The South End and converted to Islam at the age of 19.

Keith began his career in law in 1990, after earning his Juris Doctor at the University of Minnesota. He quickly became a force in the field and shifted to politics in 2002 when he was elected to the Minnesota House of Representatives. Last year, he organized a group comprised of law enforcement groups, a prosecutor, a judge and activists who set out to listen to communities about how policing is conducted and create proposals to move toward a more positive future. Matt Gottschalk, who represented the Minnesota Chiefs of Police Association in that group said that Keith has had the right conversations with law enforcement since organizing.

After taking the helm of the George Floyd case, Keith quickly moved to upgrade charges against former officer Derek Chauvin to second-degree murder, in addition to the initial third-degree murder charge. He also charged the three former officers involved in the murder with felony aiding and abetting second-degree murder and second-degree manslaughter. As he prepares to take on a system of police brutality through this trial, Keith has made clear that he feels the pressure and knows that winning a conviction will be hard work, telling the Associated Press, “This is a soul search for the whole nation.”

Thank you, Keith, for your diligence in your fight for racial justice. We are proud to have you as a Warrior and we stand with you, #WarriorStrong, in this fight.

Warrior Impact highlights the compassion, hard work and unwavering determination of WSU alumni during the COVID-19 pandemic and the efforts of those who are taking a stand to end systemic racism and positively impact the continued fight for racial equality and justice. If you have a story you’d like to share about you or a fellow alum, submit your story here.